The Most Effective Way to Expand Your Fan base

We’ve talked about “Warm Selling” being much more effective than “Cold Calling.”; We’ve also talked about how important it is to make a connection with your soon to be fans right from the start--while introducing yourself personally to them and handing them a Mailing List Card even before you take the stage. The MOST EFFECTIVE way that you can expand your fan base is by using your EXISTING FANS. Use a bold incentive system so that your existing fans WANT to bring out their friends who have never seen you live.

Start treating your EXISTING FANS like V.I.P’s. Make them feel special and let them know that THEY are the ones who are helping your band succeed. Every time your fans come to a show make sure to talk with each one and thank them personally, give them a high five and make sure you let them know how much you appreciate them. Make it clear to them that every time they bring a friend to your show, they are not only making the show more fun, but they are helping you succeed as well. Your fans WANT you to succeed, they WANT to hear you on the radio, they WANT to see you play in front of thousands of people, and they WANT to help you--so when you offer them crazy deals when they bring out friend--they will respond positively and start helping you expand your draw.

THE EXISTING FANS DEAL: We recommend calling this the “(YourBandName) Deal.” That way it has a name when you talk about it in your E-Newsletters, Audio Fliers, and when talking with your fans. Essentially, you need to pamper your existing fans and give them A LOT of stuff for FREE if they bring friends to the show who have never seen you play. Be creative here, but remember, the CRAZIER the deal and the better incentives you offer, the better this will work and the quicker you will expand your fan base. Also, this is a great way to convince people to get on the Mailing List because you can explain that only the fans on your Mailing List get offered these deals for free merch, free memorabilia, etc. 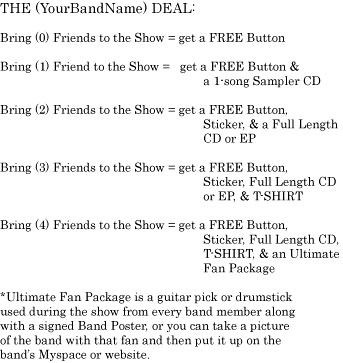 Note: Fans who are bringing out 2, 3, or 4 friends to your shows are your most die-hard and committed allies in forwarding your career as an artist. Remember to be CREATIVE because something that doesn’t seem like a big deal to you may be a very big deal to them. It’s not like you need to give them a free iPod to convince them to help you out--sometimes something as simple as taking a picture of them and your band and putting it on your Myspace or website can go a really long way. Again, remember to be creative! The possibilities for incentives that are low cost to your band but high value in your fans minds are endless!

HONOR SYSTEM: You need to stress to your fans that they are on the “Honor System.” It’s hard to know for sure if the friends your fans brought have never seen you play live or if they’ve seen you at a previous show. So make sure your fans know that this ONLY applies to people they bring who have NEVER SEEN YOU PLAY LIVE. Your fans won’t want to lie to you; they are on your side and not out to get you, so letting them know they are on the honor system works pretty well. BUT you need to make sure your fans know about this so that they don’t unknowingly “cheat.”

You can use whatever incentives you find work best. Many of our artists have found that fans will start to bring more and more friends to shows and not even care about the free merch anymore--they will just want to help out the band! However, these deals are important in developing this sort of relationship with your fans. These deals help in getting your fans to take initial action, and will convince your fans to start thinking in the mindset of “I want to help my favorite local band succeed!” In order to receive this time and effort from your fans, you should offer them good incentives and make sure they know that they play an important role in your success.

Let’s say you only have 30 existing fans. If you run these types of deals and only 1 out of 6 fans each ends up bringing out 2 friends to the show (so 10 new fans), you will increase your fan base by 30%. That is huge! If you could increase your fan base by 20-30% or more EVERY show you play, how long would it be until you’re EASILY drawing 50-100 or more people? Having a group of fans excited to see you play and waiting at the front of the stage while you sound check will also make everyone else in the room pay more attention to what’s going on. (For more on this, visit: Keep Friends Close & Your Fans Closer). People will start thinking to themselves, “Who are these guys? They have a crowd already at the front of the stage during sound check… They must be really good or something, I should maybe stick around and see what the hype is about.”

IMPORTANT: You MUST Make Sure to Connect to EVERY Friend that Your Fans Bring Out! Whenever your fans bring friends to your show, it is VITAL that you especially make sure to introduce yourself and CONNECT with those new people! It may be a good idea to give them a free sticker or button just for coming to the show. You also MUST verbally explain to them your “(YourBandName) Deal.” Explain that the person who brought them got all this free stuff, and now that they are on your Mailing List as well, they should do the same thing next time so they can get free stuff and help your band grow your fan base

That way, these new people see all the free stuff the person who brought them got, and will want to make sure to do the same thing themselves for your next show. Make sure your band mates focus the most on these new fans brought by one of your existing fans, because you need to make a good enough connection with them that they’ll come back and bring the people they know. ALWAYS focus on the NEW FANS first, and then get to your existing fans after that when connecting and talking with people at the show. It’s also a good idea to announce onstage your deal so that people in the audience who sign up on the Mailing List hear about this offer so they know to bring friends next time you play.

Your EXISTING FANS are such a great promotional tool. They can actually help bring out a lot of people if you use these deals and get your fans involved with this. In fact, some of our artists find that using these deals with their existing fans ends up bringing in almost as many new fans as all of the other combined promotional techniques they use! What is GREAT about this technique is that it doesn’t take up ANY of your time! Your fans that already were planning on coming to your show, bring their friends--and you are free to rehearse, write new material, and promote in other ways while your existing fan base is doing this. So make sure to take advantage of this and start implementing it right away. If you find anything that helps make this more effective please let us know so that we can share it with our other artists!